Application Process:
Interested and eligible candidates must apply through www.bdjobs.com/kb only. Candidates must approve their certificate from UGC if she/he is passed in O level, A level or foreign University.
Application Fee only 350 Taka. Fee must pay by SURE CASH.
Applicants age limit 30 years up to 26 September 2019. But Freedom fighter quota will be followed Bangladesh Govt job rules.

During the application period, no need to send any papers. But written exam passed candidates must show their documents as per requirement on the advertisement.
Important Date and time: 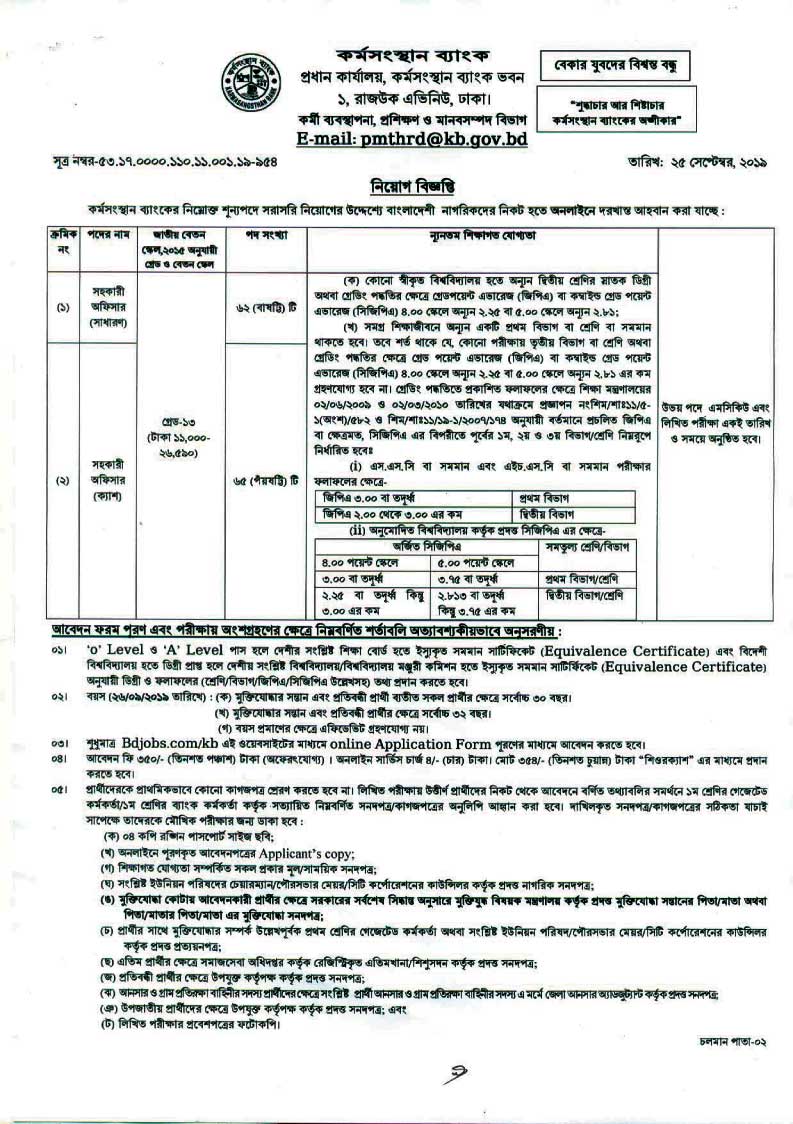 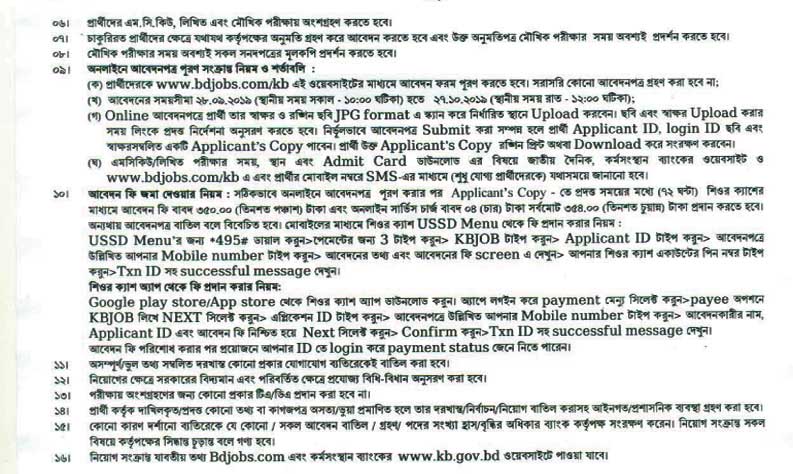 The authority will publish Karmasangsthan Bank admit card, written exam date and time at their official website www.kb.gov.bd, www.bdjobs.com/kb and national newspaper. As well as eligible candidates will get SMS notification for download admit card, exam date time and seat plan. Then you must download the admit card from www.bdjobs.com/kb using your User ID and Password. Get more bank job circular on this site.

Karmasangsthan Bank is a government-owned specialized bank in Bangladesh. The bank was founded with a vision to alleviate poverty from the country through financing the unemployed youth of Bangladesh to undertake small entrepreneurship.

The Bank carried out loan disbursement programs through 33 regional offices and 242 branches across the country in the past fiscal year, to contribute to the economic development by engaging the bank further in fulfilling the government’s pledge to address the problem of unemployment.

Karmasangsthan Bank is a government owned specialized bank in Bangladesh. The bank was founded with a vision to alleviate poverty from the country through financing the unemployed youth of Bangladesh to undertake small entrepreneurship.[1][2]

The government established the Karmasangsthan Bank, in 1998, as per Act No. 7 of 1998 (Karmasangsthan Bank Act 1998) in order to provide employment opportunities to the country's unemployed youths, alongside other initiatives by private and public sector specialised banks to create jobs. Despite certain limitations the bank had since its inception, the officials and employees of all levels at the bank have continued their sincere efforts to serve its declared purpose of supporting self-employment of the unemployed youths.

Unemployment is one of the major economic problems the country is faced with. A large number of people have remained unemployed, according to various estimates. So, it is not possible for the government alone to create employment opportunities for this huge workforce. Still, the government is pledge-bound to support self-employment of at least one member of each family to achieve socio-economic development of the country.

The Karmasangsthan Bank carried out loan disbursement programmes through 33 regional offices and 242 branches across the country in the past fiscal year, to contribute to the economic development by engaging the bank further in fulfilling the government's pledge to address the problem of unemployment.

From these loan programmes, as many as 466,807 loan recipients were directly benefitted and a total of 1,685,173 people were indirectly employed. The bank has managed to keep the classified loans, alongside recoverable loans, at a tolerable level. The rate of classified loans is 7 percent and there is no shortfall in provision against the classified loans. Although profit-making was not the primary goal of the bank, it has earned profit every year since it has continued to recover loans through close monitoring and kept the expenditures under control. In the 2016–2017 fiscal year, the bank made operational profit of Tk 0.18 crore.

The bank also paid the government an aggregate amount of Tk 67.11 crore as tax till 30 June 2017. It has maintained its reserve every year in order to consolidate its financial status and enhance capacity to bear liabilities. The amount of the reserve stood at Tk 71.17 crore. In the past fiscal year, the bank disbursed loans amounting to Tk 621.97 crore which was 5 percent higher than the previous year's loan volume. The bank recovered an aggregate amount of Tk 3441.38 crore, which showed a growth of Tk 581.47 crore compared to the money realised in the previous year.

As on 30 June 2017, the bank has a manpower size of 1390 people. As the manpower is considered to be the driving force of any institution, the Karmasangsthan Bank has established a training institute to improve efficiency of the officers.

Honesty, sincerity and ethics maintained by the workforce have resulted in success of the institution. The officials and employees of the bank, though initially deprived of some financial benefits, are now entitled to all benefits and facilities that are comparable to other public sector banks. Such practice has raised the morale and enthusiasm among the bank's officials and employees and the bank is making progress day by day.

There is an experienced board of directors to formulate policies of the bank, and the members of the board, who are high officials of the government, contribute to formulation of the policies and support smooth operations of the bank. The advice, being given by the board in the bank's policy formulation and business operation, is one of the major sources of success of the bank.

The trends of the progress, attained so far with the supports, cooperation and efforts from all, will continue in future. [3]