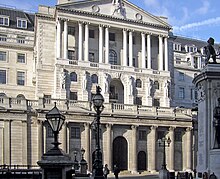 The Bank of England, established in 1694.

A bank is a financial institution that accepts deposits from the public and creates credit. Lending activities can be performed either directly or indirectly through capital markets. Due to their importance in the financial stability of a country, banks are highly regulated in most countries. Most nations have institutionalized a system known as fractional reserve banking under which banks hold liquid assets equal to only a portion of their current liabilities. In addition to other regulations intended to ensure liquidity, banks are generally subject to minimum capital requirements based on an international set of capital standards, known as the Basel Accords.

Banking in its modern sense evolved in the fourteenth century in the prosperous cities of Renaissance Italy but in many ways was a continuation of ideas and concepts of credit and lending that had their roots in the ancient world. In the history of banking, a number of banking dynasties – notably, the Medicis, the Fuggers, the Welsers, the Berenbergs, and the Rothschilds – have played a central role over many centuries. The oldest existing retail bank is Banca Monte dei Paschi di Siena, while the oldest existing merchant bank is Berenberg Bank.

Do you have a question about Banks that you can't find the answer to?

Consider asking it at the Wikipedia reference desk.

17 January 2020 –
Icelandic fishing company Samherji announces it will cease operations in Namibia. The company was embroiled in a bribery scandal there that resulted in the resignation of Namibian Fisheries Minister Bernhardt Esau and Justice Minister Sacky Shanghala, as well as the arrest of two employees of South African banking corporation Investec. (Reuters)