Standard Chartered PLC is a British multinational banking and financial services company headquartered in London, England. It operates a network of more than 1,200 branches and outlets (including subsidiaries, associates and joint ventures) across more than 70 countries and employs around 87,000 people. It is a universal bank with operations in consumer, corporate and institutional banking, and treasury services. Despite its UK base, it does not conduct retail banking in the UK, and around 90% of its profits come from Asia, Africa and the Middle East.

The name Standard Chartered comes from the names of the two banks from which it was formed by merger in 1969: The Chartered Bank of India, Australia and China, and Standard Bank of British South Africa.[8] 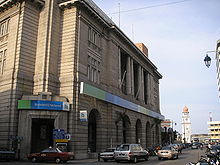 The Chartered Bank began when Queen Victoria granted a Royal Charter to Scotsman James Wilson in 1853. Chartered opened its first branches in Mumbai (Bombay), Kolkata (Calcutta) and Shanghai in 1858, followed by Hong Kong and Singapore in 1859. The Bank started issuing banknotes of the Hong Kong dollar in 1862.[8] 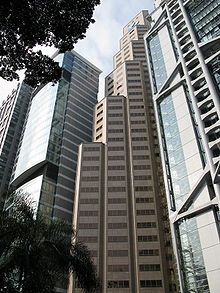 Both banks acquired other smaller banks along the way and spread their networks further. In 1969, the banks decided to merge and to counterbalance their network by expanding in Europe and the United States, while continuing expansion in their traditional markets in Asia and Africa.[8]

In 1986, Lloyds made a hostile takeover bid for the Group.[10] The bid was defeated; however, it spurred Standard Chartered into a period of change, including a series of divestments notably in the US and South Africa. Union Bank was sold to the Bank of Tokyo and United Bank of Arizona was sold to Citicorp.[11][11]

In 1987, Standard Chartered sold its remaining interests in the South African bank; since then the Standard Bank Group has been a separate entity.[12]

In 1992, scandal broke when banking regulators charged several employees of Standard Chartered in Mumbai with illegally diverting depositors' funds to speculate in the stock market. Fines by Indian regulators and provisions for losses cost the bank almost £350 million, at that time fully a third of its capital.[13]

In 1994, London's Sunday Times reported that an executive in the bank's metals division had bribed officials in Malaysia and the Philippines to win business. The bank, in a statement on 18 July 1994, acknowledged that there were "discrepancies in expense claims [that] ... included gifts to individuals in certain countries to facilitate business, a practice contrary to bank rules".[14]

In 1994, the Hong Kong Securities and Futures Commission found Standard Chartered's Asian investment bank to have illegally helped to artificially support the price of new shares they had underwritten for six companies from July 1991 to March 1993. The bank admitted the offence, apologized and reorganized its brokerage units. The commission banned the bank from underwriting IPOs in Hong Kong for nine months.[15]

In 1997, Standard Chartered sold Mocatta Bullion and Base Metals, its metals division, to Toronto-based Scotiabank for US$26 million.[16]

In 1986, a business consortium purchased a 35% stake to fend off Lloyds. A member of this consortium was Malaysian-born property tycoon Khoo Teck Puat, who purchased 5% of the bank's shares, which he later increased to 13.4%.[18] 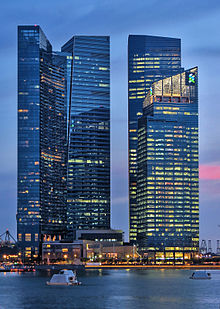 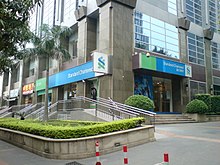 On 9 August 2006, Standard Chartered announced it had acquired an 81% shareholding in the Union Bank of Pakistan in a deal ultimately worth $511 million. This deal represented the first acquisition by a foreign firm of a Pakistani bank and the merged bank, Standard Chartered Bank (Pakistan), is now Pakistan's sixth largest bank.[24]

On 22 October 2006, Standard Chartered announced that it had received tenders for more than 51% of the issued share capital of Hsinchu International Bank ("Hsinchu"), established in 1948 in Hsinchu, Taiwan.[25]

On 29 February 2008, Standard Chartered PLC announced it had received all the required approvals leading to the completion of its acquisition of American Express Bank Ltd (AEB) from the American Express Company (AXP). The total cash consideration for the acquisition is US$823 million.[28][29][30][31][32]

On 27 November 2009, Dow Jones Financial News reported that Dubai will restructure its largest corporate entity. Among international banks, Standard Chartered has one of the largest loan portfolios in the Dubai market and the UAE as a whole, estimated to be $7.77 billion in total. This amounts to 4.2% of Standard Chartered's total loans outstanding. Other impacted banks included HSBC, Barclays, and RBS. The bank stated that any impairment arising from this exposure would not be material.[34] 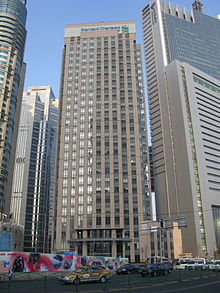 On 17 June 2010, Standard Chartered Bank and the Agricultural Bank of China (ABC) entered into a strategic alliance meant to strengthened their strategic partnership and identify joint business opportunities.[37] Joint business and cooperation task forces were set up in October that year to define the direction of the partnership and explore joint ventures.[38] The committee was to be co-chaired by Peter Sands, CEO of Standard Chartered, and Zhang Yun, President of ABC.[39]

In January 2015, the company announced that it was exiting the money-losing "equity capital markets business completely", "becoming one of the first global banks" to do so.[42] In November that year, the bank announced that it would cut 15,000 jobs, including one thousand senior jobs, "from managing director up to board executives".[43] The cuts followed a change of CEO after profit warnings and money laundering fines in the first half of the year.[44]

In 2016, Standard Chartered announced that it would stop providing loans to the midstream segment of the diamonds and jewellery industries.[45] The announcement was the result of a review of the bank's involvement in risky business sectors.[45] In 2017, the bank was reported to have lost $400 million on risky diamond debt on a portfolio of loans that was once worth $3 billion.[46] Owing to defaults of jewellery and diamond companies from 2013 onwards, Standard Chartered is currently estimated to have $1.7 billion of diamond debt still to be repaid.[46]

The company received criticism in April 2017 from the Institutional Shareholder Services (ISS). The investor advisory firm told shareholders it was concerned that targets set for the top bosses in the bank's long-term incentive plan (LTIP) were not demanding enough. Bill Winters, the chief executive, stands to net share awards with a face value of as much as £4.4m from the scheme, while Andy Halford, the chief financial officer, could receive £2.7m.[47]

On 6 August 2012, the New York Department of Financial Services (DFS), led by Benjamin Lawsky, accused Standard Chartered of hiding $250 billion in transactions involving Iran, labelling it a "rogue institution". The bank was ordered to appear and defend its actions, or risk losing its license to operate in the state of New York. The DFS said it had documents showing a cover up of transactions allegedly used to fund terrorist groups in the Middle East.[48]

On 14 August 2012, Lawsky announced that the DFS and Standard Chartered reached a settlement that allows the bank to keep its licence to operate in New York. According to the terms of the settlement, the bank agreed to pay a $ 340 million fine.[49]

The bank agreed to install a monitor to oversee the bank's money laundering controls for at least two years, and appoint "permanent officials who will audit the bank's internal procedures to prevent offshore money laundering".[49] The monitor will report directly to the DFS.[50] Lawsky's statement said "the parties have agreed that the conduct at issue involved transactions of at least $250bn."[51] The bank issued a statement confirming that a settlement with the DFS had been reached and that "a formal agreement containing the detailed terms of the settlement is expected to be concluded shortly".[51]

Other US agencies—including the Federal Reserve, the Federal Bureau of Investigation, the Treasury Department, and the Justice Department—had also begun investigations into the laundering allegations and were reportedly taken off guard by the speed of the settlement.[49]

The Treasury stated that its own investigation of Standard Chartered will continue.[52] Several financial analysts predicted that, due to its strong financial position, the bank would be able to easily cover the $900 million fine without having to raise extra capital.[52]

On 6 August 2014 Lawsky was reported to be preparing a new action against Standard Chartered over computer system breakdowns and was "discussing a potential settlement".[53]

On 19 August 2014, the bank was fined $300 million by the New York Department of Financial Services for breach of money-laundering compliance related to potentially high-risk transactions involving Standard Chartered clients in Hong Kong and the UAE. The bank issued a statement accepting responsibility and regretting the deficiencies, at the same time noting the ruling would not jeopardize its U.S. licenses.[54][55]

In April 2019, it was reported that Standard Chartered may have to pay approximately $1 billion to settle its ongoing investigations in the US and UK. Earlier in February the company had set aside $900 million towards resolution of violations of U.S. sanctions and forex trading regulations. The company also faces a penalty of roughly $134 million from the United Kingdom's Financial Conduct Authority related to historical financial crime controls which takes the amount to over $1 billion.[56]

Standard Chartered has over 86,000 employees globally and has operations in 70 markets. The bank is divided into two divisions, plus Global Business Services: The Consumer Bank and the Wholesale Bank.[57]

The consumer bank is retail focused, and focuses on individuals, small business and high-net-worth clients in the private bank. For retail customers, the unit manages savings, allows customers to make transactions, provides wealth management services, and provides mortgages and auto finance. For SMEs, the consumer bank manages cash, collections, and payments as well as offering loans.[57]

Standard Chartered Breeze is a mobile banking application for the iPhone & iPad that can also be used on the computer. It is largely similar to the online banking services offered by other banks, with the exception of its function to issue electronic bank cheques. Launched in the summer of 2010 and aggressively marketed, the reviews have been generally positive. In addition, it has attracted an uncommon amount of attention due to many innovative marketing strategies it used to promote its product, mostly focusing on social media. Standard Chartered Breeze organised a blogger's meet for bloggers to preview Breeze, and its Twitter campaign to give away a free iPad was extremely successful.[58]

Standard Chartered's primary engagement with the fintech community is focused in Hong Kong, working closely with and co-ordinated by 'The eXellerator'. The SuperCharger FinTech Accelerator, along with main partners, Standard Chartered Bank (a founding member) and Fidelity International, has twice conducted programmes enabling international growth-stage companies to expand their operations within Asia. Standard Chartered Bank has initiated proof of concept projects with two companies: Bambu and KYC Chain.[59]

Standard Chartered, along with the International Agency for the Prevention of Blindness, manages a charity called Seeing is Believing. The charity aims to eliminate preventable blindness in developing countries. Standard Chartered matches every dollar raised by the organization.[65]

The Priority Academy program was created in 2006 by the bank, with educational programmes including a study tour of Shanghai, a summer internship programme and a study seminar in the United States. The program donated $250,000 to Chan Yik Hei, a science amateur who won the Intel International Science and Engineering Fair, for his studies at the Hong Kong University of Science and Technology.[66]

In 2015, Standard Chartered was widely criticised for its $12bn funding of the controversial Carmichael Coal Mine, with a campaign led by Greenpeace calling for them to quit the project. The bank subsequentially withdrew from the deal.[67]

As a member of the Global Banking Alliance for Women, Standard Chartered works with a consortium of banks to deliver financial services to women.[73]

On 9 April 2019, Standard Chartered paid $1.1 billion to the United Kingdom Government and the United States of America's Department of the Treasury over apparent multiple violations of sanctioned programs.[74]