The City Bank is a Bangladeshi private commercial bank, operating throughout Bangladesh.[1][2] It is one of the few banks in Bangladesh with a centralized infrastructure.[3] The present CEO is Mashrur Arefin.[4] 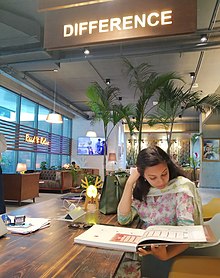 The bank started its operation in 28 March 1983 as "The City Bank Limited".[5] From 1983 till date, City Bank has been a case study in evolution, having transformed over time from a traditional organization to a critically acclaimed multi-faceted institution that embraces global best practices and chooses to be at the forefront of technological initiatives. Unlike many, the Bank's criteria for success are not only the bottom-line numbers but also the milestones set towards becoming the most complete bank in the country.

On the 25th Anniversary in 2008, The City Bank Limited revamped its image and services. This include the launch of a new logo, launched American Express credit cards, brokerage business, and City Wallet (SMS Banking) service. The name of the bank was simplified to "City Bank" from its earlier "The City Bank Limited". The new logo, depicting a red and white checkered box kite, was launched on July, 2008.[6]

City Alo is the dedicated women banking division of City Bank. Its mission is to create a one of its kind banking service with a complete banking experience specially designed for Bangladeshi women customers.