The 2014 ICC World Twenty20 was the fifth ICC World Twenty20 competition, an international Twenty20 cricket tournament, that took place in Bangladesh[2] from 16 March to 6 April 2014.[3] It was played in three cities — Dhaka, Chittagong and Sylhet.[3][4] The International Cricket Council announced Bangladesh as host in 2010.[5] It was the second consecutive time that an Asian country is hosting this event, as Sri Lanka[6] hosted the previous tournament in 2012. Sri Lanka won the tournament, beating India by 6 wickets in the final at Mirpur.[7][8]

During Group Stage points were awarded to the teams as follows:[9]

In the event of teams finishing on equal points in their group, the following tie-breakers were applied to determine their order in the table in the following order of priority: most wins, higher net run rate, head to head record in matches involving the tied teams.[9]

For the first time, the tournament featured 16 teams. All ten full members qualified automatically, joined by the six associate members that qualified through the 2013 ICC World Twenty20 Qualifier. The qualifying teams are Ireland, Afghanistan, Netherlands and making their World Twenty20 debut the UAE, Nepal and Hong Kong.

The first round consisted of 8 teams and 2 teams moved to next round. Second round was the Super 10 stage which consisted of 2 groups of 5 teams each.[10][11] The top eight Full Member nations in the ICC T20I Championship rankings as of 8 October 2012 automatically progressed to the Super 10 stage of 2014 ICC World Twenty20.[12][13]

Joining the eight full members in the super 10 stage was host nation Bangladesh (also a full member) and associate nation The Netherlands who topped their first round group by net run rate ahead of Test playing nation Zimbabwe and Ireland.

The match referees’ responsibilities throughout the tournament were shared between four members of the Elite Panel of ICC Referees:[14]

The on-field responsibilities for officiating the tournament were shared by all 11 of the Elite Panel of ICC Umpires and 3 umpires from the International Panel of Umpires and Referees:[14]

Thirty-one matches were played at three different venues in Dhaka, Chittagong and Sylhet.[3][15] 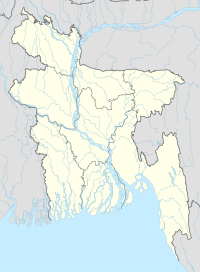 On 6 April 2013, ICC unveiled the logo of the tournament at a gala event in Dhaka. The overall look of the logo design is primarily inspired by the unique Bangladesh decoration art style. The logo uses the colours of the Bangladeshi flag with splashes of blue representing the country's rivers (also as being the ICC's own colour). The logo is also inspired by the rickshaws.[18] The T is made up of cricket stumps and the '0' in the T20 represents the cricket ball complete with a green seam.[19][20]

The official theme song for the 2014 ICC World Twenty20 Char Chokka Hoi Hoi was released on 20 February 2014. It was composed by Fuad al Muqtadir and sung by Dilshad Nahar Kona, Dilshad Karim Elita, Pantha Konai, Johan Alamgir, Sanvir Huda, Badhon Sarkar Puja and Kaushik Hossain Taposh. The song received widespread popularity among the Bangladeshi youth as well as the Bangladeshi diaspora abroad and gave birth to a new trend of flashmobs in the major cities of Bangladesh.