The tournament consisted of 14 teams, which were split into two pools of seven, with each team playing every other team in their pool once. The top four teams from each pool progressed to the knockout stage, which consisted of quarter-finals, semi-finals and a final.

The final was between the co-hosts Australia and New Zealand. Australia won by seven wickets, to win their fifth Cricket World Cup.[1]

The total attendance was 1,016,420, with an average of 21,175 per game.[2][3] The final at the Melbourne Cricket Ground had a crowd of 93,013, a record one day cricket crowd for Australia[4] The tournament is estimated to have been watched by over 1.5 billion people;[5] and the most widely watched match during the tournament was India vs. Pakistan, which is estimated to have drawn over 1 billion viewers.[6][7] Tickets for this match reportedly sold out within 12 minutes of going on sale.[8]

The ICC announced the hosts for the previous World Cup, the 2011 competition, on 30 April 2006. Australia and New Zealand had also bid for the tournament and a successful Australasian bid for the 2011 World Cup would have seen a 50–50 split in games, with the final still up for negotiation. The Trans-Tasman bid, Beyond Boundaries, was the only bid for 2011 delivered to the ICC headquarters at Dubai before 1 March deadline. Considerable merits of the bid included the superior venues and infrastructure, and the total support of the Australian and New Zealand governments on tax and custom issues during the tournament, according to Cricket Australia chief executive James Sutherland.[9] The New Zealand government had also assured that the Zimbabwean team would be allowed to take part in the tournament after political discussions about whether their team would be allowed to tour Zimbabwe in 2005.[10]

ICC President Ehsan Mani said that the extra time required by the Asian bloc to hand over its bid had harmed the four-nation bid. However, when it came to the voting, the Asians won by seven votes to four; according to the Pakistan Cricket Board (PCB), it was the vote of the West Indies Cricket Board (WICB) that turned the matter. It was reported in Pakistani newspaper Dawn that the Asian countries promised to hold fundraising events for West Indian cricket during the 2007 Cricket World Cup, which may have influenced the vote.[11] However, I.S. Bindra, chairman of the monitoring committee of the Asian bid, denied that, saying that it was their promise of extra profits of US$400 million that swung the vote their way.[12]

The ICC was so impressed by the efficiency of the Trans-Tasman bid that they decided to award the next World Cup, to be held in 2015, to them.[13]

The tournament featured 14 teams, the same number as the 2011 World Cup, giving associate and affiliate member nations a chance to participate.[14]

The format was the same as the 2011 edition: 14 teams take part in the initial stages, divided into two groups of seven; the seven teams play each other once before the top four teams from each group qualify for the quarter-finals.

On 29 January 2015, ICC reinstated the use of the Super Over for Cricket World Cup Final match if the match finished as a tie.[15][16] 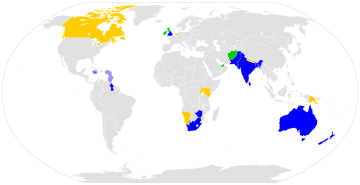 Highlighted are the countries to participate in the 2015 Cricket World Cup.
Qualified as full member of ICC
Qualified via WCL or qualifier
Participated in final stage of the qualifying process, but did not qualify
Main articles: 2011–13 ICC World Cricket League Championship and 2014 Cricket World Cup Qualifier

Per ICC regulations, the 10 ICC full member nations qualify for the tournament automatically. Immediately after the 2011 World Cup, it was decided that the next tournament would be reduced to only feature the 10 full members.[17] This was met with heavy criticism from a number of associate nations, especially from the Ireland cricket team, who had performed well in 2007 and 2011, including victories over Pakistan and England, both full member nations. Following support shown by the ICC Cricket Committee for a qualification process,[18] the ICC retracted their decision in June 2011 and decided that 14 teams would participate in the 2015 World Cup, including four associate or affiliate member nations.[19]

On 9 July 2013, as a result of a tied match against the Netherlands, Ireland became the first country to qualify for the 2015 World Cup.[22] On 4 October 2013, Afghanistan qualified for their first Cricket World Cup after beating Kenya to finish in second place behind Ireland.[23]

In preparation for the 2015 Cricket World Cup, the organising committee of the tournament was finalised. John Harnden was named chief executive,[25] James Strong as chairman,[26] and Ralph Waters was named as the deputy chairman.[27]

When Australia and New Zealand bid for the 2011 Cricket World Cup in 2006, they said that it will see a 50–50 split in games. Finally, it was decided on 30 July 2013 that Australia would host 26 matches, while New Zealand got a share of 23 matches in the tournament. There was a tense battle between Melbourne and Sydney to host the final.[28] On 30 July 2013, it was announced that Melbourne would host the final, with Sydney and Auckland hosting the semi-finals.[29]

It was announced that spectators travelling to World Cup matches in New Zealand who would otherwise not be entitled to a visa waiver, would be able to enter New Zealand if they held an Australian visitor visa. This was a special Trans-Tasman Visa Arrangement for the 2015 Cricket World Cup.[30][31][32]

The World Cup has grown as a media event with each tournament. The International Cricket Council has sold the rights for broadcasting of the 2015 Cricket World Cup for US$2 billion to ESPN Star Sports and Star Sports. According to Strong, the Local Organising Committee (LOC) wants to make the tournament the most fan-friendly event of its kind and take cricket to a wide range of communities throughout Australia and New Zealand.[33]

Sachin Tendulkar was named by the ICC as the World Cup Ambassador for the second time, after filling the role at the 2011 Cricket World Cup.[34]

The following networks broadcast the tournament:[35]

The opening ceremonies were held separately in Christchurch, New Zealand and Melbourne, Australia, on 12 February 2015, two days before the first two matches.

The International Cricket Council declared a total prize money pool of $10 million for the tournament, which was 20 percent more than the 2011 edition. The prize money was distributed according to the performance of the team as follows:[53]

Each venue hosted 3 pool stage matches. The quarter-finals were in Sydney, Melbourne, Adelaide and Wellington, the semi-finals were played in Auckland and Sydney, and the final was played in Melbourne. Altogether there were 49 matches in 14 venues, with Australia hosting 26 games and New Zealand hosting 23 games.[54]

The umpire selection panel selected 20 umpires to officiate at the World Cup: five each from Australia and England, five from Asia, two each from New Zealand and South Africa and one from the West Indies.[59]

The teams, after initially naming a provisional 30-member squad, were required to finalise a 15-member squad for the tournament on or before 7 January 2015.[60]

Fourteen non-ODI warm-up matches were played from 8 to 13 February.[61]

A total of 42 matches were played throughout the group stage of the tournament. The top four teams from each pool qualified for the quarter-finals. In the event that two or more teams are tied on points after six matches the team with the most wins was to be ranked higher. If tied teams also had the same number of wins then they had to be ranked according to net run rate.[62]