Chris Gayle, of the West Indies, was selected to play in his fifth Cricket World Cup.[1]

This is a list of the squads picked for the 2019 Cricket World Cup.[2] All 10 teams were required to submit a 15-member squad by 23 April,[3] with changes to the squad allowed to be made up to 22 May.[4] New Zealand were the first team to name their squad, naming their team on 3 April 2019.[5] The West Indies were the last team to name their squad, announcing their team on 24 April 2019, one day after the initial deadline set by the International Cricket Council (ICC).[6]

Two cricketers, New Zealand's Tom Blundell and Bangladesh's Abu Jayed, had not played in an One Day International (ODI) prior to being named in their team's squad.[7][8] On 13 May 2019, Jayed made his ODI debut for Bangladesh, against the West Indies, in the fifth match of the tri-series in Ireland.[9] Three captains, England's Eoin Morgan, the West Indies' Jason Holder and Bangladesh's Mashrafe Mortaza, had led their respective teams in the previous tournament.[10]

India announced their 15-man squad on 15 April.[24] They have also named Ambati Rayudu, Rishabh Pant, Axar Patel, Navdeep Saini and Ishant Sharma as stand-by players for the team, who can be drafted in the event of injuries to any player.[25] Rishabh Pant was called up to India's squad as cover for Shikhar Dhawan, after Dhawan suffered a hairline fracture on his left thumb during India's game against Australia.[26] On 19 June 2019, the Board of Control for Cricket in India (BCCI) confirmed that Dhawan had been ruled out for the rest of the tournament, with Pant confirmed as his replacement.[27] Vijay Shankar was ruled out of India's final two round-robin matches due to an injury, with Mayank Agarwal named as his replacement.[28]

Pakistan announced their initial World Cup squad on 18 April.[30] They announced their final squad on 20 May, with Junaid Khan, Faheem Ashraf and Abid Ali replaced by Wahab Riaz, Mohammad Amir and Asif Ali.[31]

Sri Lanka announced their World Cup squad on 18 April.[35] Nuwan Pradeep was ruled out of Sri Lanka's last two matches of the tournament, after contracting chickenpox. He was replaced by Kasun Rajitha.[36]

West Indies announced their World Cup squad on 24 April.[37] On 19 May 2019, Sunil Ambris, Dwayne Bravo, John Campbell, Jonathan Carter, Roston Chase, Shane Dowrich, Keemo Paul, Khary Pierre, Raymon Reifer and Kieron Pollard were all named as reserve players by Cricket West Indies.[38] On 24 June 2019, Andre Russell was ruled out of the rest of the tournament, due to a knee injury, and was replaced by Sunil Ambris.[39] 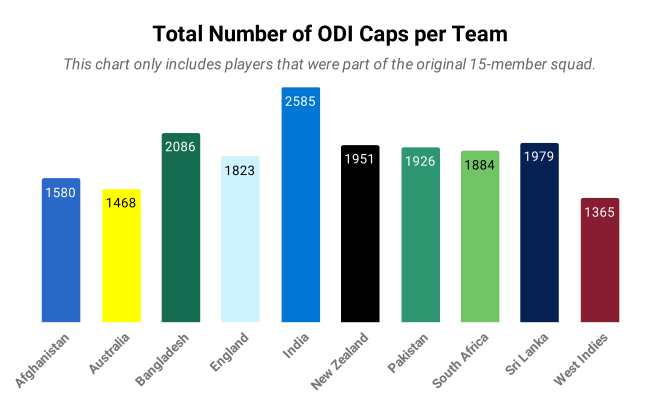 This chart shows the total number of One Day International (ODI) caps for each team competing in the 2019 ICC Cricket World Cup. The caps only include those who were in the original 15 member squad submitted to the International Cricket Council (ICC) on 23 April 2019. The caps include all appearances in ODIs until 30 May 2019, the first day of the world cup.