English cricket team in Australia in 1894–95 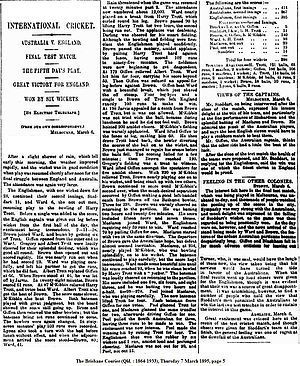 The England cricket team toured Australia and Ceylon in 1894-95. The team, captained by Andrew Stoddart, played 24 matches in total, of which it won 10, drew 10 and lost 4. In first-class cricket, the team played 12, won 8 and lost 4.

Five Test matches were played. England won 3-2 after Australia had recovered from 0-2 down to 2-2 with the final match a true decider. The first Test, won by England, was the first of only three Tests in history to be won by a side forced to follow on.

The team used Colombo as a stopover during its long sea voyage and played against local sides that were not first-class. This was the fifth time that an English cricket team had visited Ceylon but it was not until 1911-12 that another arrived.