English cricket team in Australia in 1911–12 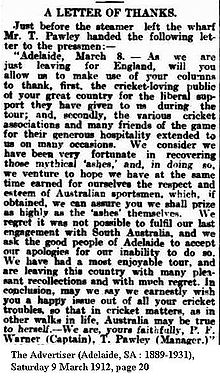 Letter of thanks from the English Captain P.F. Warner for the tour

The English cricket team in Australia in 1911–12 was led by Plum Warner, but Johnny Douglas took over the captaincy for all five Test matches when Warner fell ill early in the tour. Despite losing the first Test at Sydney, a side which included Jack Hobbs, Frank Woolley, Sydney Barnes and Wilfred Rhodes hit back to win the remaining four Tests. They thus regained The Ashes.

Frank Foster and Barnes dominated with the ball, sharing 66 wickets out of the 95 Australian wickets which fell. Warner wrote: "Finer bowling than theirs I have never seen on hard, true wickets." Hobbs (3), Rhodes, Woolley and Jack Hearne recorded centuries.

Barnes dismissed Bardsley, Kelleway, Hill and Armstrong for 3 runs in his opening spell on the first morning of the second Test. Later in the game, when the crowd barracked Barnes for deliberating over a field setting, he threw the ball down in disgust and refused to continue until order was restored. Hobbs and Rhodes shared an opening stand of 147 in the third Test at Adelaide. They exceeded this with 323 at Melbourne in the next Test, which remains the record for England's first wicket against Australia. Frank Woolley hit 305* in 205 minutes in a tour game against Tasmania.

For Australia, the outstanding performer was "Ranji" Hordern, who took 32 wickets in the Test series. He had match figures of 12 for 135 in the first Test, assisting Australia to their only win of the series. In the final game he took 10 for 161. None of the Australian batsmen shone. Victor Trumper made their only century, but his average for the series was just under thirty.

The tour was organised by the Marylebone Cricket Club and matches outside the Tests were played under the MCC name.

The English team had a stopover in Colombo en route to Australia and on 21 October played a single-innings match (i.e., not first-class) there against the Ceylon national team. MCC won by 154 runs.[1]