English cricket team in Australia in 1928–29

The England cricket team toured Australia in 1928–29. England, known as the MCC in matches outside the Tests, retained The Ashes, winning the first four Tests and losing the last for a 4–1 series victory.

England were stronger in batting, more reliable and consistent in bowling and very definitely superior in fielding.

The series was defined by the prodigious runscoring of Wally Hammond, playing his maiden Ashes series, who with a run of scores of 251 at Sydney, 200 and 32 at Melbourne, and 119 not out and 177 at Adelaide, scored a then-record series aggregate of 905 runs at an average of 113.12; the record has only been surpassed once, by Donald Bradman in the 1930 Ashes.[2] 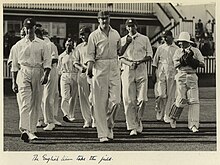 Larwood bowling to Beckett at 6-342 in Australia's first innings in the Third Test at Melbourne.

The MCC touring party was:[1]

This Test match still holds the record for the highest match aggregate (1497) without a no-ball extra.[3]

The English team had a stopover in Colombo en route to Australia and played a one-day single-innings match there against the Ceylon national team, which at that time did not have Test status.[4]