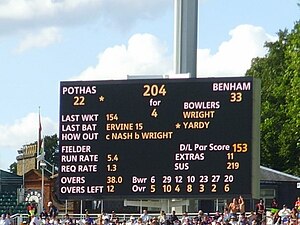 In cricket, an extra (sometimes called a sundry) is a run scored by, or awarded to, a batting team which is not credited to any individual batsman. They are the runs scored by methods other than striking the ball with the bat.

The extras are tallied separately on the scorecard and count only towards the team's score. A game with many extras is often considered as untidy bowling; conversely, a game having few extras is seen as tidy bowling.

An umpire may call a no-ball when the bowler or fielder commits an illegal action during bowling.

The most common reason for a no-ball is overstepping the popping crease with the front foot. A rarer reason is when the bowler's back foot touches or lands outside the return crease. Other reasons include when a bowler throws (or chucks) the ball, or bowls a full toss above waist high, or for dangerous or unfair short pitched bowling.

The penalty for a no-ball is one run (or, in some one-day competitions, two runs, and/or a free hit); furthermore, the no-ball does not count as one of the six in an over and an extra ball is bowled.

The run awarded for the no-ball is not credited to an individual batsman's score but is tallied separately as part of the team's score. Any additional runs scored by the batsman off the bat, whether by running or by a boundary, are included in the individual's score.

It is possible for a team to score byes or leg byes (but not wides) from a delivery ruled a no-ball; these are in addition to the run awarded for the no-ball.

Since the 1980s a no-ball has been scored against the bowler, making the bowling statistics more accurate.

A ball being delivered too far from the batsman to strike it, provided that no part of the batsman's body or equipment touches the ball, is known as a wide.

When a wide is bowled the batting team are awarded a run, which is tallied separately on the scorecard and does not count towards the individual batsman's score. Additionally, a wide is not counted as one of the six balls in the over and a replacement is bowled. All wides are all added to the bowler's score.

Byes may be scored from no-balls as well as from legitimate deliveries.

In modern cricket, byes are normally scored against the wicket-keeper in their statistics.

If the ball hits the batsman's body, then provided the batsman is not out leg before wicket (lbw) and the batsman either tried to avoid being hit or tried to hit the ball with the bat, the batsmen may run. In this case, regardless of the part of anatomy touched by the ball, the runs scored are known as leg-byes. If (with the same provisos) the ball reaches the boundary, whether or not the batsmen ran, then four leg-byes are awarded.

Leg-byes can be scored from no-balls or legitimate deliveries and are counted only towards the team's score, not that of the batsman.

Unlike no-balls and wides, byes and leg-byes are not scored against the bowler.

Penalty runs are awarded for various breaches of the Laws, generally related to unfair play or player conduct. Many of these penalties have been added since 2000. Penalties are awarded under Law 41 for Unfair Play [1] and, since 2017 under Law 42 for Players' Conduct [2]

The most extras in a One Day International innings is 59, achieved twice by Pakistan: against West Indies in 1989 and against Scotland in 1999.[4]

The most extras in a Twenty20 innings is 40, achieved by Lahore Eagles against Sialkot Stallions in 2005.[5]