M.A.Chidambaram Stadium (எம்.ஏ.சிதம்பரம் மைதானம்) is a cricket stadium in Chennai, India. The stadium was established in 1916 and it is the third oldest cricket stadium in the country after Eden Gardens in Kolkata and Feroz Shah Kotla Ground in Delhi. Named after M. A. Chidambaram, former President of BCCI, the stadium was formerly known as Madras Cricket Club Ground and is also nicknamed the Chepauk stadium. It is the home ground of the Tamil Nadu cricket team and the Indian Premier League team Chennai Super Kings. Chepauk hosted its first Test match on 10 February 1934, the first ever Ranji Trophy match in 1936 and Indian cricket team's first ever test victory in 1952 against England. The 1986 India-Australia match held at Chepauk was only the second ever Tied Test in the history of the game.

Chepauk Stadium was established in 1916 and has been the home venue of the Tamil Nadu cricket team ever since. It is the third oldest cricket stadium in the country after Eden Gardens in Kolkata and Feroz Shah Kotla Ground in Delhi.[2]

The Chepauk crowd is known to be amongst the most appreciative in the country.[3] The crowd gave a standing ovation to Saeed Anwar after scoring the highest ever ODI score of 194 against India in 1997. The crowd was again appreciative when Pakistan won a Test match in 1999 and the Pakistani team made a lap of honour in appreciation of the spectators' sporting behaviour.[3] 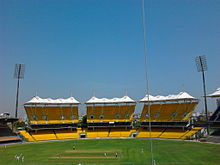 In June 2009, reconstruction work of the stadium was taken up at the cost of ₹175 crore (US$25 million).[4][5] The plan consisted of constructing three new reinforced concrete stands designated I, J, and K accommodating 12,000 spectators and 24 hospitality boxes under translucent PTFE membrane roofs.[6] Hopkins Architects, London and Nataraj & Venkat Architects, Chennai were contracted by the Tamil Nadu Cricket Association.[1]

The renovation was completed in 2011 and the old roofing with pillars that often blocked the view in the old stadium were replaced by light quad conical roofing held together by cables. The stadium can currently accommodate 50,000 spectators. The stands are at a gradient of 36° and lets the sea breeze in to get the ground's traditional swing back.[7]

On 31 March 2015, the Supreme Court ruled that the renovation violates regulations relating to public safety.[8][9] The court ruled that the parts of the renovation which violate the regulations must be demolished and until the appropriate planning permissions are issued and the demolition is complete, three stands (I, J, K) must remain sealed.[10][11] Cricket matches take place in the stadium with the I, J, and K stands locked for spectators.

This stadium has hosted 7 One Day International matches across 3 world cups. The World cup matches hosted by this stadium are as follows: