The National Stadium (Urdu: نیشنل اسٹڈیم‎; Sindhi: قومي اسٽيڊيم) cricket stadium in Karachi, Pakistan, owned by the Pakistan Cricket Board.[2] It is the home ground of Karachi Kings, and is home to many other Karachi's domestic cricket teams. The stadium is able to hold 34,228 spectators.[3] After renovations to Gaddafi Stadium reduced its capacity to 27,000, National Stadium became the second highest capacity cricket ground in Pakistan.

The Pakistani cricket team have a remarkable Test record at the ground, having only lost twice in 40 Test matches[4] (vs. England, December 2000–01, and South Africa, October 2007–08). The stadium has witnessed several memorable moments, such as Viv Richards 181 against Sri Lanka at the 1987 Cricket World Cup, Mohammad Yousuf's record ninth century of the year to break Viv Richards' record of most runs in a calendar year, and Kamran Akmal's famous century against India on a very difficult pitch in 2006, after Pakistan had collapsed to 39 for 6, as part of a memorable come-from-behind victory. 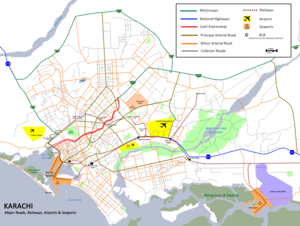 Location of National Stadium in Karachi

Karachi, Pakistan's largest and most populous city, presents an interesting and colourful combination of the old and new. The National Stadium became Karachi's fifth and Pakistan's 11th first-class ground. The inaugural first-class match was played at NSK between Pakistan and India on 21–24 April 1955, and it became a fortress of Pakistan cricket.[4] In 34 Tests between that first match and December 2000, Pakistan won 17 and were never beaten. Their only Test defeat on the ground came in the gloom against England in 2000–01.

The first ODI at the National Stadium was against West Indies on 21 November 1980, and it went down to the last ball as Gordon Greenidge drove Imran Khan imperiously to the cover boundary with three needed. It has been a far less successful limited-overs venue, with defeats outnumbering victories. In fact, in a little under five years from the start of 1996, Pakistan failed to win on the ground. It also staged a quarter-final match in the 1996–97 World Cup.

Sachin Tendulkar and Waqar Younis played their first test match in this stadium.

In September 2019, the Pakistan Cricket Board named it as one of the venues to host matches in the 2019–20 Quaid-e-Azam Trophy.[5]

PCB ex-chairman Najam Sethi had announced in 2017 that Karachi’s National Stadium will host the final match of 2018 Pakistan Super League in March 2018. The condition of the stadium was improved for the final. The historic match, which was played between Islamabad United and Peshawar Zalmi saw the return of international stars to National Stadium after a gap of nine years, ended up being relatively one-sided, as the champions of first edition Islamabad United were crowned champions once again. The event at the stadium was the first major event since 2009 in the port city and it was highly welcomed by crowds and the stadium witnessed packed house for the big game. In order to make it a successful event many security forces were deployed in and around the stadium to maintain the law and order situation, by there efforts the event was held successfully. In 2017 PCB Chairman had announced that West Indies would tour Pakistan for 3 match T20I series which were scheduled to be played in Lahore, the fixtures were to be played in November 2017. However, early in November 2017, reports announced that the West Indies team would not be travelling to Pakistan over security concerns. The Pakistan Cricket Board (PCB) chairman Najam Sethi stated that the original schedule was changed due to unforeseen weather, logistic issues and challenges with security. In March 2018, the PCB confirmed that the fixtures would take place in April at the National Stadium in Karachi after the conclusion of PSL 2018. The last time an international cricket match was played at the venue in Karachi was in February 2009, when Sri Lanka toured Pakistan. That series was cut short, following an 2009 attack on the Sri Lanka national cricket team.

It was the first tour in Pakistan of more than one match against another Test nation since Zimbabwe toured in May 2015.

In May 2019, at the Asian Cricket Council (ACC) meeting in Singapore, the Pakistan Cricket Board (PCB) made a request to Sri Lanka Cricket (SLC) to play the two Test matches in Pakistan.[6] In July 2019, the SLC sent a security expert to assess the situation in Pakistan,[7] with Sri Lanka Cricket saying they were "likely" to play a Test match in the country.[8] A further decision was taken by Sri Lanka after a security delegation inspects venues in Lahore and Karachi in early August 2019.[9][10] The delegation gave Sri Lanka Cricket "very positive feedback", suggesting that Sri Lanka could be open to playing a Test match in Pakistan.[11] On 22 August 2019, Sri Lanka's Sports Minister confirmed their agreement to play a three-match ODI and T20I series in Pakistan in October, but ruled out playing any Test matches.[12][13] On 23 August, PCB announced dates for the ODI and T20I series. Sri Lanka were to play three match ODI series at National Stadium, starting from September 27. [14] This was supposed be the first time since 21 January 2009 that an ODI match will be held at National Stadium. But, the first ODI match was abandoned due to heavy rain.[15] It was the first time that an ODI match at the venue had been washed out.[16] As a result, the Pakistan Cricket Board (PCB) rescheduled the second ODI match, moving it back one day to 30 September 2019, to allow the groundstaff more time to prepare the outfield. As a result, National Stadium had to wait for few more days to host an ODI match.[17]

In October 2019, the PCB proposed hosting the two Test matches in Pakistan, instead of the UAE, at venues in Rawalpindi and Karachi.[18] Sri Lanka Cricket said that they were "very positive" with regards to the progress of playing Test cricket in Pakistan.[19] In November 2019, the PCB confirmed the dates and venues for the Test series. National Stadium hosted the second test match, starting from 19th of December.[20]