R. Premadasa International Cricket Stadium (RPS) (Sinhala: ආර්. ප්‍රේමදාස ක්‍රීඩාංගනය, Tamil: ஆர். பிரேமதாச அரங்கம்; also known as Khettarama Stadium, Ranasinghe Premadasa Stadium or simply as the Premadasa Stadium) is a cricket stadium[2] on Khettarama Road, Maligawatta, Colombo, Sri Lanka. The stadium was, before June 1994, known as the Khettarama Cricket Stadium and is today one of the main venues where the Sri Lankan cricket team play, having hosted more than 100 one day international matches. It is the largest stadium in Sri Lanka with capacity of 35,000 spectators. It has hosted the 2012 ICC World Twenty20 finals between Sri Lanka and West Indies, 2002 ICC Champions Trophy finals between Sri Lanka and India and first semi final of the 2011 ICC Cricket World Cup between Sri Lanka and New Zealand. Also this is the venue where the highest Test score in the history was recorded; 952 by Sri Lanka against India. It has capacity exceeding Lord's Cricket Ground. It is nicknamed "Home of Sri Lankan cricket".

The stadium is the brainchild of the late Sri Lankan president Ranasinghe Premadasa, who championed the development of this 40,000-seater concrete bowl, the biggest stadium in Sri Lanka. Opened on 2 February 1986 with a match between a Sri Lanka 'B' side and an England 'B' team, the stadium was built on swampland previously used by monks ferrying across to the Khettarama temple adjacent to it.

The inaugural One Day International was played on 9 March 1986, Sri Lanka v Pakistan. On 28 August 1992 it hosted its inaugural Test match between Sri Lanka and Australia. The venue is best remembered for holding the world record for the highest Test total – 952/6 declared by Sri Lanka against India in 1997/1998 in which former Sri Lanka captain Sanath Jayasuriya scored 340 and Roshan Mahanama 225, the pair sharing a partnership 576 for the second wicket, at that time it was the highest for any wicket in a Test Match. On 10 February 2009 it hosted inaugural T20i match between Sri Lanka & India as well as 1st T20i to be played in Sri Lanka.

A new training center has been developed behind the stadium with 16 practice pitches and dormitories for the Sony Max Cricket Academy which started in 2003.

The Premadasa Stadium underwent a reconstruction project in preparation for the 2011 Cricket World Cup. The stadium has been undergoing large-scale renovations since 2009. It has had its seating capacity increase from 14,000 to 40,000, the media-box accommodating 200 journalists, and other upgrades. The renovations have cost Sri Lanka Cricket $8 million.[3]

In July 2010, a report filed by the ICC pitch consultant, Andy Atkinson, raised concerns over the condition of the outfield and the pitch claiming he was worried at the slow pace of progress.[4] Although none of the buildings at the stadium were near completion, the 2nd Test of the West Indies tour of Sri Lanka in 2010, was held at the venue in 23–27 November. Sri Lanka Cricket defended choosing the stadium saying that the decision to stage a game was to allow cricketers to acclimatize themselves to the ground ahead of the World Cup games.[5] The Test match was staged using temporary seating for spectators in a corner of the stadium as only players' pavilions had permanent arrangements. Since the press box was not completed reporters and commentators facing technical difficulties used a makeshift arrangement.

The main four public stands were refurbished along with the player dressing room area and the corporate boxes. A VIP car park is in the northern end of the ground. 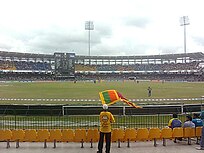 Pavilions A and B are fully equipped with seating in two tiers, lower and higher. Several corporate boxes are built in these two stands. Pavilions C and D are built between the scoreboard in the stadium with a two-tiered seating system. The lower tiers have concrete paving allocated for floor seating and the upper tier includes fully standard seating blocks. The grandstand and top level block above the player pavilions have enhanced quality seating. Pavilions A and B give a moderate view of the scoreboard while the grandstand not only gives good view of the scoreboard but also the game and pitch

On 21 September 2011, it was announced that the stadium will host fifteen 2012 ICC World Twenty20 matches, including semi-finals and the final.[6]