The Scotland national cricket team represents the country of Scotland. They play their home matches at The Grange, Edinburgh, and also some other venues.

Scotland became Associate Members of the International Cricket Council (ICC) in 1994[7] after severing links with the England cricket team two years earlier. Since then, they have played in three Cricket World Cups (1999, 2007 and 2015) and three ICC World Twenty20 tournaments (2007, 2009 and 2016). However, their first win in either of these events did not come until they beat Hong Kong in the 2016 World Twenty20.[8] Scottish cricket team is governed by Cricket Scotland.

Scotland have also played in every ICC Intercontinental Cup tournament, winning the inaugural edition in 2004. Between 2010 and 2013, the team competed in the ECB 40 as the Scottish Saltires.

Kyle Coetzer became captain of the side in November 2016 after Preston Mommsen who had captained the side since September 2014 stepped down. The coach is South African Shane Burger, who took on the role in January 2019.[1]

In April 2018, the ICC decided to grant full Twenty20 International (T20I) status to all its members. Therefore, all Twenty20 matches played between Scotland and other ICC members after 1 January 2019 are a full T20I.[9]

The first recorded cricket match in Scotland took place in Alloa in 1785.[10] It would be another eighty years, however, before Scotland played their first full match, against Surrey in 1865, which they won by 172 runs.

The first Scottish Cricket Union was formed in 1879, and the national team beat Australia by 7 wickets three years later. The cricket union became defunct in 1883, and Grange Cricket Club took over the administration of the game until 1909. The first match against Ireland took place in Dublin in 1888, with Ireland winning. They also played South Africa, West Indies, an all-Indian team, and New Zealand before the start of World War II.

1948 saw Australia visit Scotland for two games at the end of their tour of England. These games, both of which were won by the Australians, were to be the last international games for Don Bradman. The Don signed off in typical style, making a fine unbeaten 123 in the innings victory.[11]

The most famous cricketers to have come from Scotland are probably the former England captain, Mike Denness, Warwickshire all-rounder Dougie Brown, and former England Test player Gavin Hamilton. Another great Scottish cricketer was Brian Hardie, who was a major contributor to the successful Essex side of the 1970s and 1980s. Possibly one of the best spinners and certainly a respected journalist was the aptly named Ian Peebles,[12] who was one of the cricketers of the year in 1931 alongside Don Bradman.

The most infamous cricketer, a man who was vilified in Australia, was a Scot, Douglas Jardine, father to and inventor of "Body Theory", which is well documented under "Bodyline". Jardine was born in British India, and died in Switzerland, spending most of his life in England. However, his parents were Scottish. He asked for his ashes to be scattered in Scotland and gave his own children Scottish names.

In 1992 Scotland severed their ties with the Test and County Cricket Board (TCCB) and England, and gained Associate Membership of the ICC in their own right in 1994.[7] They competed in the ICC Trophy for the first time in 1997, finishing third and qualifying for the 1999 World Cup, where they lost all their games.[13] The 2001 ICC Trophy saw them finish 4th, losing a play-off game to Canada,[14] but they won the 2005 tournament, beating long-time rivals Ireland in the final. 2004 saw Scotland first confirm themselves as one of the leading associate nations by winning the inaugural Intercontinental Cup. However, they did not progress beyond the first round in the 2005 tournament.[15]

March 2006 saw Scotland embark on a pre-season tour to Barbados. They performed with some credit, although they only won one of their 6 games, against a Barbados XI.[16] They owed much of their success to Dougie Brown, who re-qualified to represent Scotland internationally in 2004. They competed in the C & G Trophy in English domestic cricket in the early part of the 2006 English cricket season. They performed better than expected, winning three of their nine games, and finishing eighth in the Northern conference.[17]

In June, they played their first ODI since the 1999 World Cup when they took on Pakistan in Edinburgh.[18] Without key players Dougie Brown and Navdeep Poonia, they lost by five wickets.[19] They finally got their first ODI win in the European Championships in August with a win over Holland in a rain-shortened game.[20] They again missed key players for some games in this tournament though, and thanks to their loss against Ireland, finished second in the tournament.[21]

During 2006 and early 2007, Scotland participated in the third edition of the Intercontinental Cup. They beat Namibia by an innings in May 2006, but draws against Ireland in August and the United Arab Emirates in January 2007 meant that they failed to reach the final.[22] In December 2006, they travelled to Test nation Bangladesh for a two-match ODI series – their first outside the UK – but lost both matches heavily.[23]

In January 2007, after the Intercontinental Cup match against United Arab Emirates in Sharjah, they travelled to Kenya, first playing in a tri-series against Canada and Kenya in Mombasa, which they finished second in.[24] This was followed by Division One of the World Cricket League in Nairobi, where Scotland finished as runners up.[25]

They then travelled to West Indies for their second World Cup. They again lost all their games and failed to progress beyond the first round.[26] Back in the UK, they competed in the Friends Provident Trophy, their only win coming against Lancashire.[27] They also drew an Intercontinental Cup match against United Arab Emirates[28] and an ODI against Pakistan in July was washed out.[29]

In July, Scotland took part in a quadrangular series in Ireland against the hosts, Holland and West Indies. However, the endeavour was not a success. They lost their matches against Ireland and West Indies with the match against Holland being abandoned due to rain.

At the beginning of August, Scotland were on Intercontinental Cup duty as they won against Holland by an innings and 59 runs. They then drew with Ireland in a rain affected match, only gaining 3 points however after a poor 1st innings display. India were Scotland's next ODI opponents in mid-August, which was shown live on BBC Scotland from Titwood, Glasgow. The match was reduced slightly to 46 overs after a couple of brief showers, but India won by 7 wickets.

Having reached the final of the World Cricket League earlier in the year, Scotland qualified to play in the Twenty20 World Championship held in South Africa. They lost by 51 runs to Pakistan in their first game, and did not get a chance to play their other Group D opponents India, as the game was washed out without a ball being bowled.

In early August, Scotland participated with five other Associate nations in the 2009 ICC World Twenty20 Qualifier in Belfast. Despite an initial loss to hosts Ireland, victory against Bermuda secured a semi final slot. Throwing off the disappointment of an unexpected loss to Holland in the semi-final a few hours earlier, Scotland bounced right back for a 9 wicket victory over Kenya (who had advanced ahead of Canada), to secure third place. However, with only two nations guaranteed to progress, qualification for the 2009 ICC World Twenty20 was only granted when Zimbabwe confirmed that they would not attend the tournament.

On 18 August, Scotland played their first ODI encounter against England. Hosting the Auld Enemy, at the Grange Cricket Club in Edinburgh. However the match was abandoned due to rain after less than 3 overs of England's reply to Scotland's 156/9.

Scotland participated in the 2009 ICC World Twenty20 in England in June 2009. They were drawn alongside Test nations New Zealand and South Africa in Group D, with both matches being played at The Oval in London.

The first match, against New Zealand, was shortened to 7 overs per side due to rain. Scotland batted first and made 89/4, with Kyle Coetzer top-scoring with 33. However, three no-balls and a dropped catch enabled New Zealand to win by seven wickets with an over to spare.[31]

In the second match, South Africa made 211/5, with AB de Villiers hitting 79 not out off only 34 balls. In response, Scotland were bowled out for 81, more than half of which was scored by Coetzer (42). The 130-run margin of defeat was the second-largest in terms of runs in a Twenty20 International.[32]

In 2010, Scotland took part in the inaugural ECB 40 tournament.

Scotland competed in the qualifiers in the United Arab Emirates, to compete for a place in the 2010 ICC World Twenty20 in the West Indies. They competed for a place with Afghanistan, Canada, Ireland, Kenya, Holland, United Arab Emirates and USA.[33] The tournament was disappointing for Scotland, going out in the group stage without winning a single match.

Scotland's Intercontinental Cup campaign was more successful as they reached the final in December – against Afghanistan – at the bespoke new cricket stadium in Dubai. Scheduled as a four-day first-class match of two innings each side, Afghanistan won the game in eight sessions. This was also the first cricket match of any kind that was live-streamed online – by two Scottish fans, with the agreement of the ICC.[citation needed]

During March and April 2009 Scotland attempted to defend the ICC Trophy they won in 2005. To secure qualification for the 2011 Cricket World Cup a top four place was targeted. They were also attempting to secure ODI status by finishing in the top six.

Scotland started the tournament badly by losing three of their five group games. With only the points earned against Namibia being taken through to the Super Eights, Scotland faced a difficult route to the World Cup.[34]

Scotland started the Super Eights well by beating Holland in their first match. Defeats against Kenya and Afghanistan followed. The result of which threatened Scotland's qualification for the World Cup as well as the possibility of losing their ODI status if they finished out of the top six.

Victory against United Arab Emirates in their last game, and an improved run-rate, thanks to the 122 run victory, ensured a top six place for the Scots, securing ODI status until the next round of World Cup qualifiers.

The Scottish team qualified for the ICC Cricket World Cup 2015 in Australia and New Zealand, but was eliminated after six straight losses out of six matches.[35]

New Zealand A tour of Scotland in 2014

In January 2017 Scotland took part in the 2017 Desert T20 Challenge. They won all three of their group fixtures, before losing to Ireland in the semi-finals.

Zimbabwe tour of Scotland in 2017

Scotland achieved their first victory against a full member of the ICC when it defeated a touring Zimbabwe side.

Scotland achieved their second victory against a full member of the ICC when it defeated a touring England side. 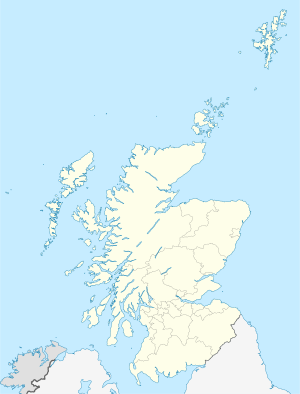 ‡ Only the matches between Scotland, Ireland and Holland in the 2006 tournament have official ODI status.

This lists all the active players who have played for the Scotland in the past year (since 2 January 2019) and the forms in which they have played, or any players (in italics) outside this criteria who have been selected in the team's most recent squad.

The following people have coached the Scottish national side at various stages. For some coaches, the exact dates of their tenure are unavailable, although key tournaments are noted: 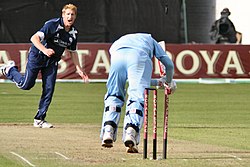 ODI record versus other nations[53]

T20I record versus other nations[54]

In June 2019, the following cricketers were selected to represent Scotland A for their tour to Ireland to play the Ireland Wolves:[70]