Steven John Rhodes (born 17 June 1964, Bradford, Yorkshire, England)[1] is an English cricket coach and former cricketer. He was the former coach of the Bangladesh national cricket team, having been sacked on 8 July 2019 after Bangladesh's poor performance in the Cricket World Cup 2019[2]. He was best known as a wicket-keeper, but was also a useful number six or seven batsman, making twelve first-class centuries.

He was selected for the England tour to India in 1988/89, but when this was cancelled for political reasons he lost his chance, and it was to be 1994 before he made his Test cricket debut.

His selection was primarily down to the new chairman of selectors, Ray Illingworth, who announced at his appointment that he wanted balanced sides i.e. an all-rounder at number 6 with a wicket-keeper at number 7. As such, Illingworth was saying that his chosen wicket-keeper had to contribute with bat and gloves. While Rhodes had a golden summer with the gloves in 1994, he did not make enough runs - especially against the powerful South African bowling attack in the second half of the season.

Chosen to tour Australia in 1994-95, he had a poor tour with gloves and especially with the bat - frequently dismissed by Australian spearhead Craig McDermott, often leg before wicket (LBW). Having waited so long to make his Test debut (he had played one One Day International in 1989), he was dropped in favour of Alec Stewart in 1995, and never played for England again. Nevertheless, Rhodes was named as one of the Wisden Cricketers of the Year in 1994. 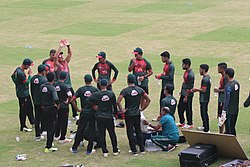 In May 2005, Worcestershire announced that Rhodes had been appointed Coach, following the departure of Tom Moody. He subsequently served as director of cricket between 2006 and 2017.

On 7 June 2018 Bangladesh Cricket Board (BCB) appointed Rhodes head coach for the national team until the end of the 2020 ICC World Twenty20.[3][4] In July 2018 Rhodes lost his first series as Bangladesh coach when West Indies won the two-match Test series 2–0.[5] In the ODI series, Bangladesh defeated West Indies 2–1 and recorded their second ODI series victory in West Indies.[6] Later, Bangladesh managed to beat West Indies in the T20I series with a 2–1 lead.[7] Rhodes praised his team that they made a comeback and won the last two series after they were defeated in the Test series, and he was surprised that they won the T20 series against the world champions West Indies.[8]

In the last time, Bangladesh have won their first ever tournament final under Rhodes after failing previous 6 times. Tri nation series between Bangladesh, Ireland and West Indies, the Tigers have beaten Windies by 5 Wicket and won the trophy first time ever in their history.

In July 2019, Rhodes' contract with the BCB was terminated, following the team's eighth-place finish in the 2019 Cricket World Cup.[9]