The West Indies cricket team, nicknamed the Windies, is a multi-national men's cricket team representing the Anglophone Caribbean region and administered by Cricket West Indies. The players on this composite team are selected from a chain of fifteen Caribbean territories, which are parts of several different countries and dependencies. As of 29 December 2019, the West Indies cricket team is ranked eighth in the world in Tests, ninth in One-Day Internationals (ODIs) and tenth in Twenty20 Internationals (T20Is) in the official International Cricket Council (ICC) rankings.[8]

From the mid-late 1970s to the early 1990s, the West Indies team was the strongest in the world in both Test and One Day International cricket. A number of cricketers who were considered among the best in the world have hailed from the West Indies: Sir Garfield Sobers, Lance Gibbs, George Headley, Brian Lara, Clive Lloyd, Malcolm Marshall, Alvin Kalicharan, Sir Andy Roberts, Rohan Kanhai, Sir Frank Worrell, Sir Clyde Walcott, Sir Everton Weekes, Sir Curtly Ambrose, Michael Holding, Courtney Walsh, Joel Garner, Sir Viv Richards and Sir Wes Hall have all been inducted into the ICC Hall of Fame.[9][10]

The current side represents:

Currently, Cayman Islands and Turks and Caicos Islands, other historical parts of the former West Indies Federation and now British Overseas Territories, have their own teams.

National teams also exist for the various islands, which, as they are all separate countries, very much keep their local identities and support their local favourites. These national teams take part in the West Indian first-class competition, the Carib Beer Cup (earlier known as the Busta Cup, Shell Shield and various other names).[12] It is also common for other international teams to play the island teams for warm-up games before they take on the combined West Indies team.

The population of these countries and dependencies is officially estimated at around 6 million, which is more than Scotland and the Republic of Ireland.

The member associations of Cricket West Indies are: 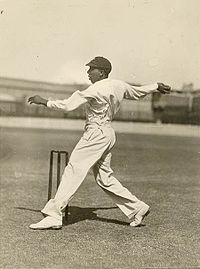 Learie Constantine, who played Test cricket in the 1920s and 1930s, was one of the first great West Indian players.

Darren Sammy. The West Indies have won three major tournament titles: the Champions Trophy once, and the World Twenty20 twice. Both World T20s were won with Sammy as captain, making him the only West Indian captain besides Clive Lloyd with multiple ICC tournament victories.

The history of the West Indies cricket team began in the 1890s, when the first representative sides were selected to play visiting English sides. The WICB joined the sport's international ruling body, the Imperial Cricket Conference, in 1926,[13] and played their first official international match, granted Test status, in 1928,[14] thus becoming the fourth Test 'nation'. In their early days in the 1930s, the side represented the British colonies that would later form the West Indies Federation plus British Guiana.

The last series the West Indies played before the outbreak of the Second World War was against England in 1939. There followed a hiatus that lasted until January 1948 when the MCC toured the West Indies.[15] Of the West Indies players in that first match after the war only Gerry Gomez, George Headley, Jeffrey Stollmeyer, and Foffie Williams had previously played Test cricket.[16] In 1948, leg spinner Wilfred Ferguson became the first West Indian bowler to take ten wickets in a Test, finishing with 11/229 in a match against England;[17] later that same year Hines Johnson became the first West Indies fast bowler to achieve the feat, managing 10/96 against the same opponents.[18]

The West Indies defeated England for the first time at Lord's on 29 June 1950 and, on 16 August 1950, completed a 3–1 series win when they won at The Oval. Although blessed with some great players in their early days as a Test team, their successes remained sporadic until the 1960s when the side changed from a white-dominated to a black-dominated side under the successive captaincies of Frank Worrell and Gary Sobers.

By the late 1970s, the West Indies led by Clive Lloyd had a side recognised as unofficial world champions, a reputation they retained throughout the 1980s.[19] During these glory years, the West Indies were noted for their four-man fast bowling attack, backed up by some of the best batsmen in the world. In 1976, fast bowler Michael Holding took 14/149 in a Test against England, setting a record which still stands for best bowling figures in a Test by a West Indies bowler.[20][21] The 1980s saw the team set a then-record streak of 11 consecutive Test victories in 1984 and inflict two 5–0 "blackwashes" on England.

Throughout the 1990s and 2000s, however, West Indian cricket declined, largely owing to the failure of the West Indian Cricket Board to move the game from an amateur pastime to a professional sport, coupled with the general economic decline in West Indian countries, and the team is struggling to regain its past glory. Victory in the 2004 Champions Trophy and a runner-up showing in the 2006 Champions Trophy left some hopeful, but it was not until the inception of Twenty20 cricket that the West Indies began to regain a place among the cricketing elite and among cricket fans, as they developed ranks of players capable of taking over games with their power hitting, including Chris Gayle, Kieron Pollard, Marlon Samuels, Lendl Simmons, Andre Russell and Carlos Brathwaite. They beat Australia and then host Sri Lanka in the 2012 World Twenty20 to win their first ICC world championship since the 1979 World Cup and then bested England to win the 2016 World Twenty20, making them the first team to win the World Twenty20 twice. As an added bonus, the West Indies also became the first to win both the men's and women's World Twenty20 on the same day, as the women's team beat three-time defending champion Australia for their first ICC world title immediately beforehand.

Former flag of the West Indies cricket team used until 1999. This flag became public domain but the current version is copyrighted.

Most cricketing nations use their own national flags for cricketing purposes. However, as the West Indies represent a number of independent states and dependencies, there is no natural choice of flag. The WICB has, therefore, developed an insignia showing a palm tree and cricket stumps on a small sunny island (see the top of this article). The insignia, on a maroon background, makes up the West Indian flag. The background sometimes has a white stripe above a green stripe, which is separated by a maroon stripe, passing horizontally through the middle of the background.[22] Prior to 1999, the WICB(C) had used a similar insignia featuring a cabbage palm tree and an island, but there were no stumps and, instead of the sun, there was the constellation Orion. It was designed in 1923 by Sir Algernon Aspinall, then Secretary of the West India Committee.[23] Around the same time in the 1920s the suggested motto for the West Indies team was "Nec curat Orion leones", which comes from a quote by Horace, meaning that Orion, as symbolical of the West Indies XI, does not worry about the lions [of English cricket].[24]

For ICC tournaments, '' by David Rudder is used as the team's anthem.

Main article: List of cricket grounds in the West Indies 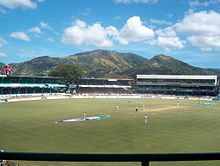 The following eleven stadia have been used for at least one Test match.[25] The number of Tests played at each venue followed by the number of One Day Internationals and twenty20 internationals played at that venue is in brackets as of 12 January 2020: 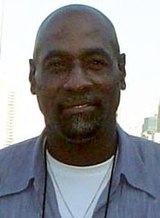 Viv Richards, who has a Test batting average of 50.23 from 121 matches, captained the West Indies from 1985–86 to 1991, a period throughout which the West Indies were the best Test match side in the world.

When playing one-day cricket, the Windies wear a maroon-coloured shirt and trousers. The shirt also sports the logo of the West Indian Cricket Board and the name of their sponsors, at present, Sandals, who has been the sponsor since 2018 and of their suppliers BLK. The one-day cap is maroon with the WICB logo on the left of the front, with two yellow stripes.

When playing first-class cricket, in addition to their cricket flannels West Indian fielders sometimes wear a maroon sunhat with a wide brim or a maroon baggy cap. The WICB logo is on the front of the hat. Helmets are coloured similarly.

During World Series Cricket, coloured uniforms were adopted. The initial West Indies uniform was pink and was later changed to maroon to match their Test match caps. Grey was also added as a secondary colour. In some of their uniforms grey has been dominant over the traditional maroon. Some uniforms had green, yellow or white as accent colour.

The West Indies women's cricket team has a much lower profile than the men's team. They played 11 Test matches between 1975–76 and 1979, winning once, losing three times, and drawing the other games. Since then, they have only played one further Test match, a draw game against Pakistan in 2003–04.[42] They also have an infrequent record in One Day Internationals. A team from Trinidad and Tobago and a team from Jamaica played in the first women's World Cup in 1973, with both sides faring poorly, finishing fifth and sixth respectively out of a field of seven.[43] The Windies united as a team to play their first ODI in 1979, but thereafter did not play until the 1993 World Cup. The side has never been one of the leading sides in the world, however, with their main success being achieving second place in the International Women's Cricket Council Trophy, a competition for the second tier of women's national cricket teams, in 2003. They finished in fifth place in the most recent World Cup, which was held in 2004–05. Their overall record in one-dayers is to have played 45, won 17, lost 27 with one no result.[44]

Because of the women's side's relatively low profile, there are few well-known names in the game. The most notable is probably Nadine George, a wicket-keeper/batsman, who became the first, and to date only, West Indian woman to score a Test century, in Karachi, Pakistan in 2003–04. George is a prominent supporter of sport in the West Indies, and in particular, in her native St Lucia, and in 2005 was made an MBE by the Prince of Wales for services to sport.[45]

2016 saw the West Indies women win their first ICC world championship – the 2016 Women's World Twenty20, after beating three-time defending champion Australia by eight wickets at Eden Gardens with members of the men's team in the crowd to support. 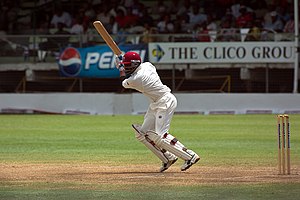 Triple centuries scored for the Windies

At the ICC 2011 Cricket World Cup, Kemar Roach became the sixth bowler to claim a World Cup hat-trick against the Netherlands

The following men have captained the West Indian cricket team in at least one Test match: 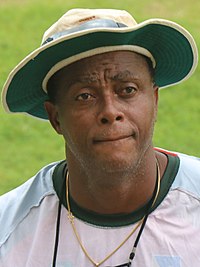 This lists all the players who have played for West Indies in the past year and the forms in which they have played.[47]